"As I Remember It"

Eric Gray on his memories of the Second World War.

The war lasted from 3rd September 1939 until the Japanese surrendered in August 1945. The Germans and Italians had surrenered 2 or 3 months earlier.

I was 9 years old when I first heard that war had been declared and I remember the exact time and place where I did so. Our house was in a terrace block with a back yard which faced onto a lane. It was lunchtime on a beautiful September day and I was sitting on the 5ft wall at the bottom of the yard facing into the lane. The next door neighbour had the radio on and had heard the news that
we were 'now at war with Germany'. She came out to tell me.

Britain was allied to Poland at that time and the Prime Minister, Neville Chamberlain, had tried to persuade the German leader, Adolf Hitler, to withdraw his troops from Poland which they had invaded two days previously. He failed to do so with the result that Britain had no alternative but to declare war on Germany.

It was not long before the reality struck home. Shortly afterwards, when we had all been issued with gas masks, the siren sounded warning us of an air raid.
My mother, father and myself donned our masks for an hour or so until the
'all clear' sounded. I remember to this day the rubbery smell of that gas mask - and waiting for the bombs to fall (which, thankfully, they did not).

For two or three years, the news of the progress of the war always seemed to be very bad - and getting worse. The newspapers and the newsreels in the cinemas reported the Germans' advance through Europe, Africa and Russia. Britain had been totally unprepared for a war, whereas the Germans had been preparing for a long time.

At home, it was the big cities which took the brunt of the devastation, with cities like London and Coventry being badly hit. About half the buildings in the centre of Coventry were destroyed during one six-hour air raid by the Germans and nearly six hundred people were killed.

As the war years progressed, the tide began to turn and the Germans began to retreat on many fronts. It was now the turn of German cities to be bombed.
I would stand in our lane and watch wave after wave of Lancaster bombers fly overhead on their outward journey. It was a very impressive sight.

We had a spare room in our house and two evacuees came to stay with us from dangerous areas in the bigger cities.

The 'black out' could be a bit of a problem. I remember once walking back after visiting a friend. I was walking up to a T-junction and couldn't see a thing. It was pitch dark. The result was that I walked straight into the church wall at the top of the junction. Quite a shock!

Everyone was worried that the Germans might invade Britain - they were only 20 miles away across the English Channel. Indeed, it was expected that they would invade. The only thing which stopped them was the small number of brave fighter pilots taking off from local aerodromes in their Spitfires and meeting the German bombers coming across the channel every day - and the Royal Navy patrolling the narrow channel.

I used to cycle some 10 to 15 miles to the local aerodromes to watch the Spitfires taking off and landing. Later, American airmen with their 'Flying Fortresses' became based here. These Americans lived locally in Gainsborough, where a housing estate was specially built for them. All of us in the town were amazed at the houses - they had a thing called 'central heating'!! Never heard of such a thing. All we had were coal fires, and usually only in one room of the house.

At the Grammar School, where I had gone at the age of twelve, I joined the school's Air Training Corps. With the Corps, we learned aircraft recognition and visited a local airfield. At the airfiled, after being kitted out with parachutes, we all took turns in being passengers in a small aeroplane. It was nothing like flying in the pressurised ailiners of today. It rose and fell in the air pockets which existed around the airfield.

During the school holidays, I was required to help on the land, picking peas and potatoes and helping with the harvest. Hard work! On one of the farms were some Italian prisoners of war who had been put to work on the land.

My father was 33 years old at the beginning of the war but was not called up for military service as he was in a 'reserved occupation'. He was a carpenter working in a factory and his work was regarded as being important for the war effort. When not at work, he was an Air Raid Warden. His most unpleasant job was helping with the wreckage of one of our bombers which had returned from a raid on Germany but had not quite made it to the local aerodrome. It crashed into a house in Gainsborough.

As the war years advanced, it gradually dawned on me that if the war didn't end soon, I too would be called up for military service and might be sent to the front line. Fortunately for me, it did end, in 1945.

In 1945, at the age of 15, a friend and myself borrowed my parents' tandem cycle and cycled all the way down to Torquay. Food rationing was still in force and all road signs had been removed to make it difficult for the Germans, should they invade, to find their way around. It didn't help us either! There were no motorways in those days.

For several years after the war, men reaching the age of eighteen were required to serve two years in the army, navy or air force. I was called up for army service at this age and served two years in the south of England. 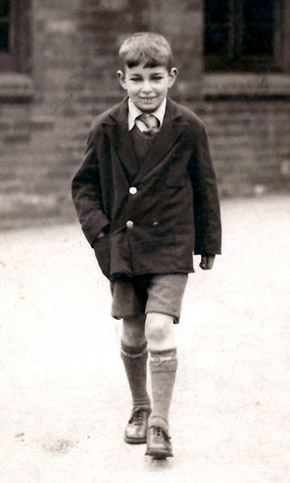 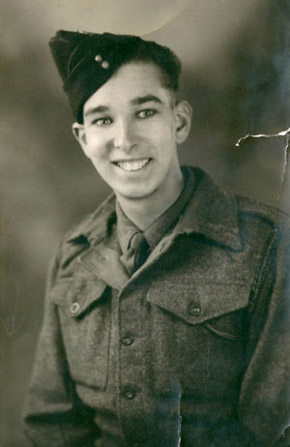